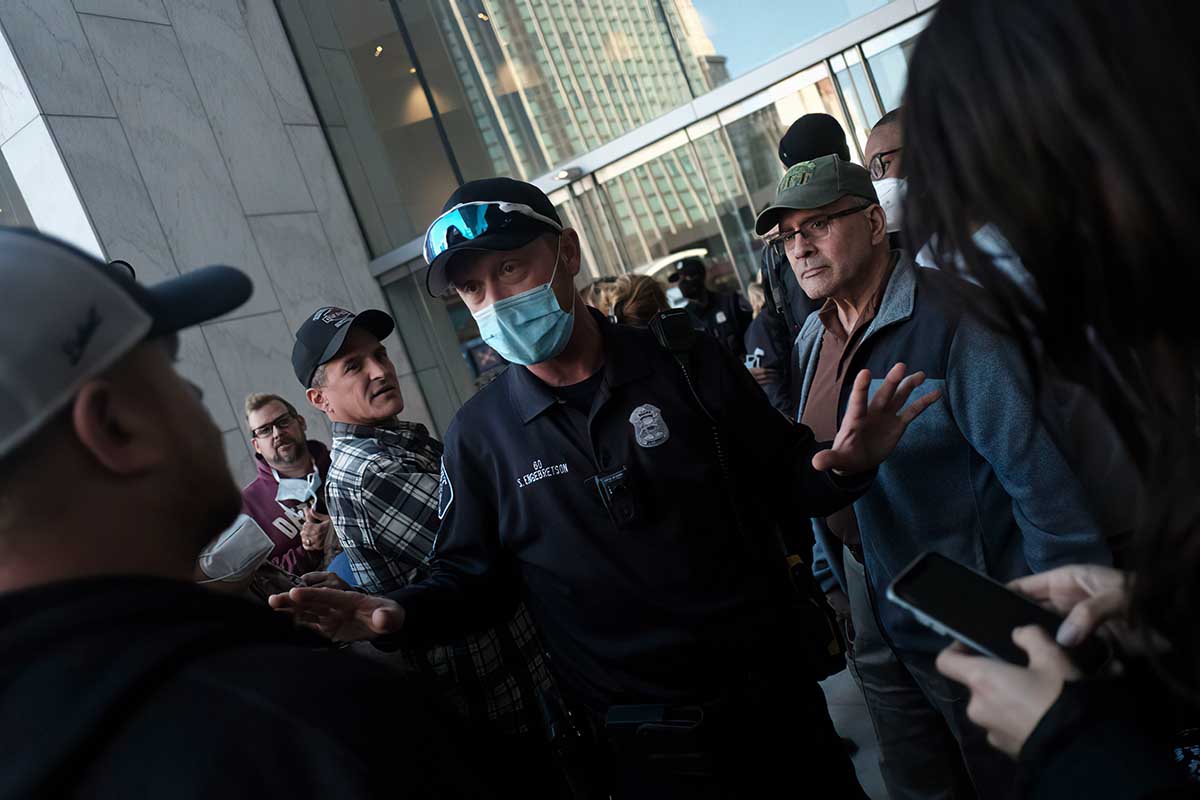 The protesters claim that Democrats flooded the absentee vote-counting board with invalid ballots to rig the election in favor of Biden. The protesters also claim that fewer Republican poll challengers were allowed to oversee the ballot counting process than Democratic ones.

That’s despite the fact that Trump almost doubled his support in Detroit. Four years ago, Trump managed to get about 7,000 votes in Detroit, and this time, nearly 13,000 city residents voted for him. Biden, however, swept Detroit with 233,000 votes.

The last time a Republican presidential candidate won the support of Detroit voters was in 1928, when Herbert Hoover and running mate Charles Curtis won in a landslide victory against Democrats Al Smith and Joseph Robinson, according to Daniel Baxter with the Detroit Department of Elections.

Yet, Trump supporters protested at TCF Center downtown from Wednesday through the weekend, when a social media call went out from conservative activists to rush the Detroit Elections Central Counting Board. The activists gathered outside of TCF Center and demanded to be let in to oversee the count. Some were not allowed into the facility because of COVID-19 capacity limitations. Protesters who weren’t allowed in gathered in front of the convention center and outside the doors of the hall where the count took place.

Detroit police responded to the scene and helped maintain order while election workers, poll challengers and watchers continued on with the count.

But some Detroiters say the Pro-Trump activists were treated more favorably by the police than Black Lives Matter protesters.

“They did not hesitate to try to silence our voices … to erase the feelings of Black Detroiters and to erase the experiences of the Black people in the movement,” Wallace said about the pro-Trump actvisits who tried to disrupt the city’s vote count.

In a video on the Detroit Police Department’s Facebook page, Craig spoke about the protests to a group of reporters outside TCF Center on Friday. He says he and his officers allow people to exercise their constitutional right as long as they followed the law.

“If there are individuals in a group that shift from peaceful protests to committing crimes … throwing projectiles at our officers, attacking or destroying property, those are the kinds of things that make us respond,” Craig said in the video.

Some have argued that conservative poll challengers did in fact go against election law by chanting, “Stop the count” and banging on the glass windows while poll workers were trying to count and process ballots.

According to the Secretary of State’s website, a poll challenger can be removed for unnecessarily obstructing or delaying the work of election inspectors or acting in a disorderly manner. Sharon Dolente, voting rights strategist with the ACLU of Michigan and a poll challenger who worked inside of TCF Center, previously told BridgeDetroit that she believes interrupting the voting process, poll challenger or not, is unlawful.

“A challenger does not have the right to stay in the room if they are being disruptive. This disruption, while the room is already at capacity, takes the focus off the important work of counting every single vote,” Dolente told BridgeDetroit.

But people who were working inside TCF Center at the time say most challengers were not removed during or after their chants and disruptions. DPD did arrest a man outside of TCF Center who was driving a truck with a trailer carrying dozens of signs with pro-Trump messaging. Craig said that the man was using amplified speakers to shout from his car, he was blocking traffic and that, after multiple warnings, he was arrested. That was the only arrest made at any of the pro-Trump protests in Detroit, according to DPD.

In the video, Craig says this summer’s Black Lives Matter protesters were handled more harshly because those groups broke laws and antagonized his officers.

“So we look back at 100-plus days of nightly protests here in Detroit, there had probably been seven instances where we had to use force,” he said. “Each and every time, it was because of a response to behavior.”

In the earliest days of those nightly protests, Craig said he and his officers would not allow “outside agitators” to cause problems in Detroit or start violence. In a Fox News interview, which came later in the summer, Craig said he wouldn’t let protesters occupy sections of the city, like when protesters started looting and vandalizing property in Portland, Oregon.

Wallace believes the demonstrators wanted to deny Black Detroiters their right to vote.

“If we’re going to be at a place where right-wing extremism of fascism and neo-Nazis or whoever are going to be trying to take power or to trample and stomp on the constitutional rights of Black people, Detroit is certainly one of the places where that’s going to happen because it’s such a stronghold of Black power. It’s such a stronghold of like, the Black radical tradition. So it’s not surprising at all,” she said.

Wallace and others who protested alongside Detroit Will Breathe this summer have alleged in a lawsuit that the Detroit Police Department used excessive force against them multiple times. A DPD officer placed Wallace in a chokehold as she was arrested in the wake of the controversial Hakim Littleton shooting in July.

As a result of the lawsuit, a federal judge temporarily banned DPD officers from using chokeholds, tear gas, sound cannons, rubber bullets and batons against Detroit Will Breathe and other groups protesting against police brutality. Wallace says DPD needs to address this hypocrisy.

“They’re going to let these racist extremists come to Detroit and do what they’re doing,” she said.

Although Wallace called the right-wing protesters extremists, there is no evidence of any conservative protesters inciting violence in Detroit at the recent protests, according to DPD.

Chief Craig told BridgeDetroit on Monday that his officers haven’t used force at protests unless they are physically provoked.

“Certainly, we’re very supportive of the right of free speech. We don’t take any sides. — any sides at all. That even goes down to hurling insults,” Craig said. “When people say bad things to us, we don’t respond to that. But when it comes to attacks, when it goes from hurling insults to hurling projectiles, then we have to take appropriate action.”

Blair Anderson, a Detroit activist and one of the original Black Panthers from Chicago who was with Fred Hampton the night he was assassinated in December 1969, agrees with Wallace.

The Detroit police are treating the group of disgruntled conservative protesters differently than groups of people protesting against police brutality, says Anderson.

Donations to BridgeDetroit are being matched dollar for dollar

As reporters in a nonprofit newsroom, the BridgeDetroit team works hard to write the stories that keep you informed about what matters most to our community. Right now, donations to BridgeDetroit go even further! Will you stand up for BridgeDetroit as we prepare for 2021 and beyond?