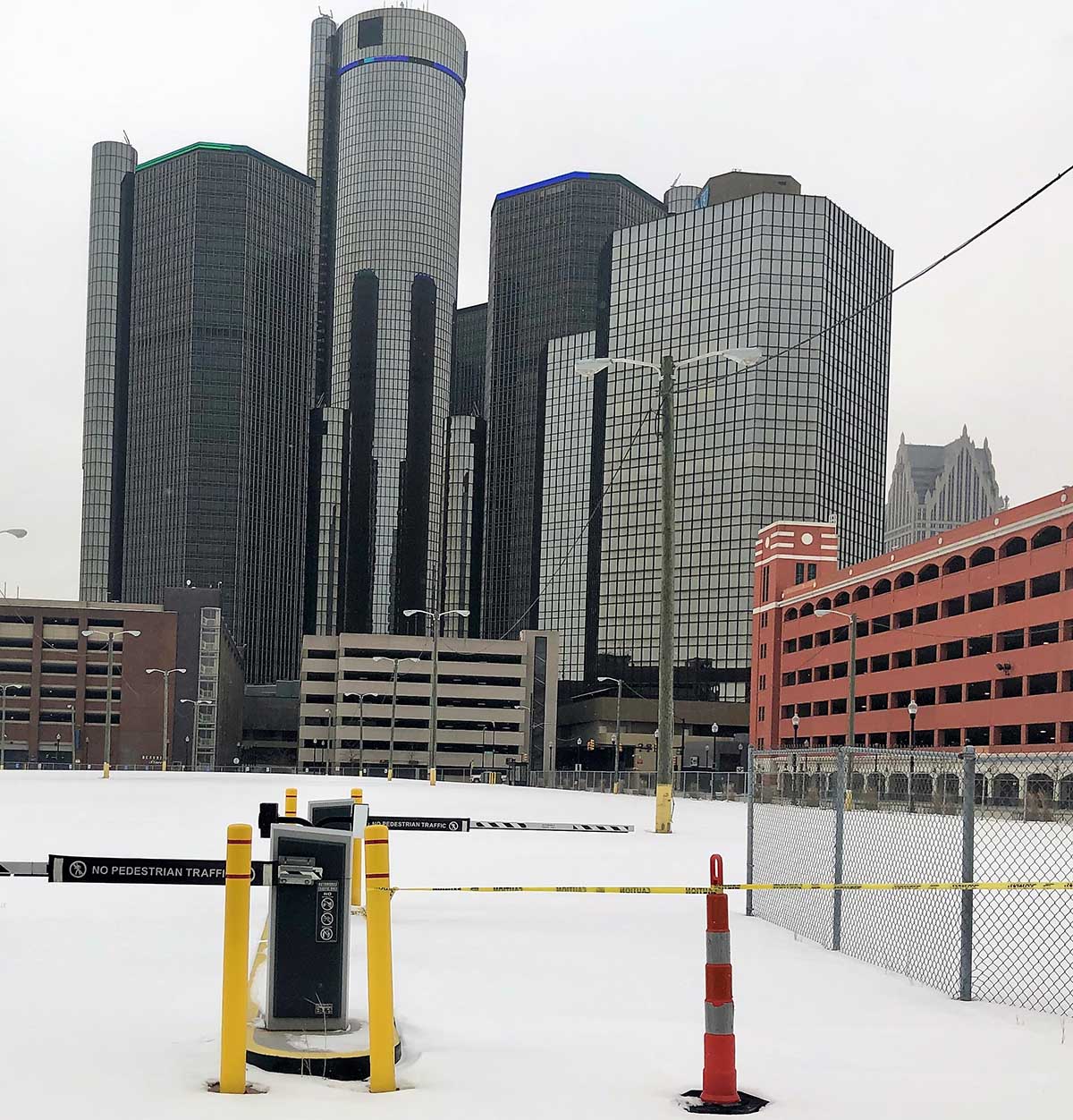 Michigan’s local income tax laws are clashing with the COVID-19 reality of work and it has cost Detroit $170 million and counting.

Detroit’s income tax is collected from anyone who is paid for work done in the city.  Everyone pays it — from a touring pop star who performs in a Detroit venue to a downtown office worker.

The income tax is, by far, the city’s largest source of tax revenue. Detroit depends on the money to help fund a slew of city services, from police and firefighters to plowing snow from streets.

The City has already made sweeping cuts that impact most Detroiters because of the losses in income tax. Many of the city’s 8,000-person full-time workforce has had pay cut and hours reduced. That means various offices have fewer hours open to the public. Summer recreation programs for youths were canceled. Improvements at parks and streets and other city properties have been delayed. The city also took $20 million it planned for its retiree protection fund and used it to pay for more immediate needs.

The $170 million loss from income tax makes up 41% of the estimated $410 million in total lost tax revenue since the pandemic began nearly one year ago, according to the latest estimate by the City’s Office of the Chief Financial Officer.  The estimate is based on the amount of income tax collected prior to the pandemic.

City of Detroit officials declined requests to be interviewed. Instead, the City emailed a written response that said, among other things, it is following efforts by the Michigan Municipal League to change state laws about income tax. The Municipal League is a nonprofit group representing municipalities and municipal leaders.

“At this date, the City continues to examine the MML’s proposals and is closely following their efforts around reforming Michigan’s municipal finance system,” read part of the email statement sent to BridgeDetroit

One way Detroit is hemorrhaging income tax revenue is from the massive job loss, whether temporary or permanently, caused by the pandemic lockdowns. At one point, the City estimated more than 50,000 Detroit-based workers had lost their jobs, at least temporarily. When those workers received unemployment or pandemic-relief checks, the city’s income tax was not taken out of their checks, due to federal and state laws.

But it is the new stay-at-home worker that is causing cities across the nation to take big tax hits.

In Detroit, tens of thousands of workers have spent nearly one year working from home. If the worker doesn’t live in the city, state law says their employers don’t have to take out the city’s income tax. For workers who live in Detroit, the tax is still being paid.

Detroit is not alone. It is one of 24 cities in Michigan with a local income tax, according to the  Municipal League. Income tax revenue makes up, on average, about 30 percent of a city’s budget, according to the State of Michigan’s Department of Treasury.

On Thursday, Gov. Gretchen Whitmer offered some relief by recommending Detroit get $25 million in the next state budget to make up for the lost income tax. It would be part of $70 million for the 24 Michigan cities that depend on income tax revenue. The proposal needs approval from the State Legislature.

“It doesn’t come close to making up further revenue loss,” Dave Massaron, the state budget director, said during a Lansing press conference Thursday. “Cities have been particularly hard hit. Our cities are on the frontline of responding to the pandemic and providing services across the state.” Massaron is the former chief financial officer for the City of Detroit.

Last fall, the Municipal League began to lobby the Legislature to change the law so Detroit and other cities could collect income tax from workers who don’t live in the city. That effort didn’t succeed. The group supports Gov. Whitmer’s effort to give aid to cities through her proposed state budget 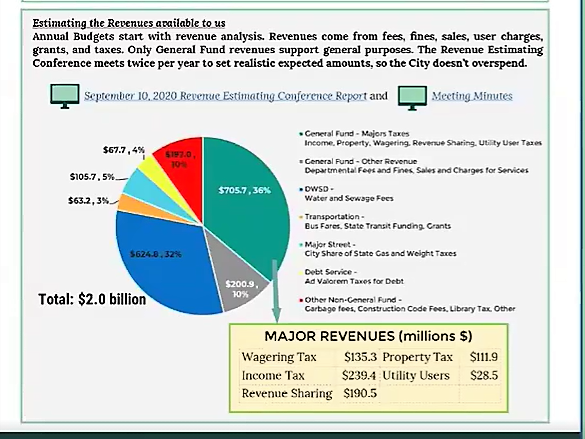 A breakdown of the City’s proposed 2021 budget. (Screenshot from a City of Detroit presentation)

“The big question is how many of those workers will become permanent,” remote workers once the lockdown restrictions are lifted, Hackbarth said. “Are we going to have to fundamentally change the income tax?” Hackbarth said. That’s an issue cities may press later this year.

BridgeDetroit contacted some of the city’s largest private employers. Only one private employer, Blue Cross and Blue Shield of Michigan, said it continues to take out the city income tax from workers’ paychecks even if the employee is working from their home outside the city limits. Again, the company is not required to do so under state law.

Other large employees, including Henry Ford Health System, Detroit Medical Center and Ilitch Companies, say that a substantial number of employees have already returned to their Detroit-based jobs, which means those workers are again paying city income tax.

“We are involved in ongoing discussions about what our return to work may look like once the governor’s order is lifted,” he said. “A determination will be based on the type of work to be performed as well as the health and safety of our team members.”

The city’s largest employer, Rocket Companies, declined to answer. But company representatives have met with the state Municipal League about any potential change in the  state income tax, said the league’s Hackbarth.

Detroit officials will provide an update on the state of the city’s budget on Tuesday 1 p.m. during its February Revenue Estimating Conference, which the public can watch online.