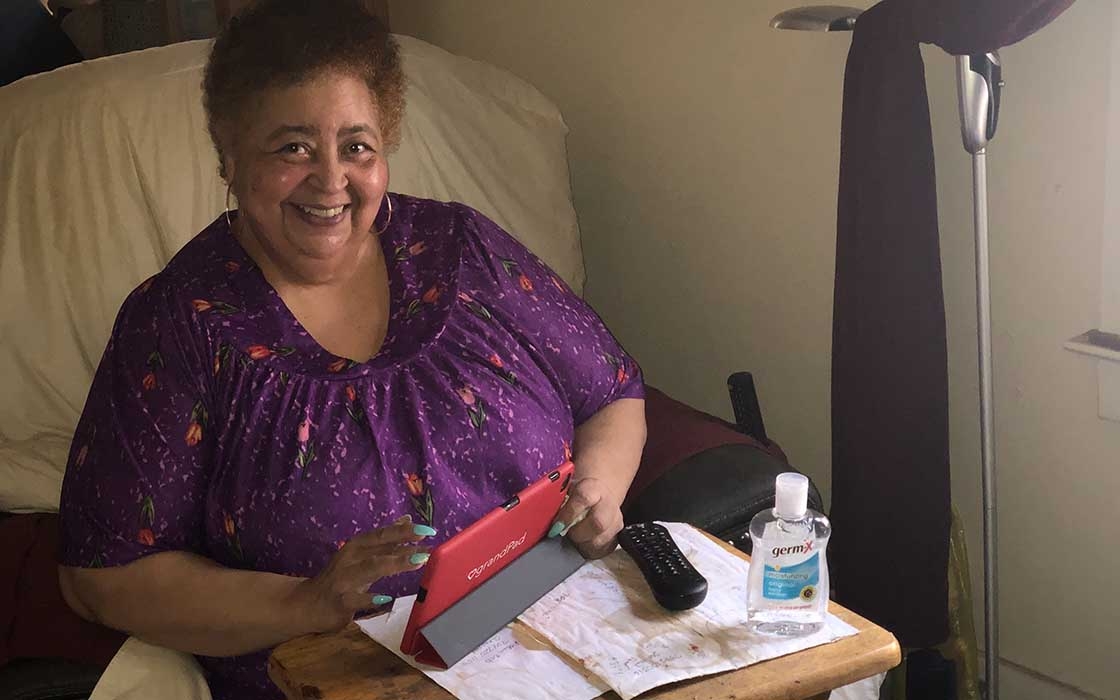 With a Grandpad tablet, Joyce Hearn, 69, of Detroit connects with friends she used to see regularly at PACE Southeast Michigan, a program for seniors who otherwise might be in a nursing home. (Courtesy photo)

Handed super simple technology, more than a 100 seniors in southeast Michigan have swiped their way past one long-held stereotype — chatting online with loved ones, discussing aches and pains with doctors, picking away at crosswords or popping into a casino game.

The effort could have significant implications for seniors and their health providers as the industry relies increasingly on telehealth to communicate with patients during the coronavirus outbreak.

Dump nuisances like itty-bitty icons. Clean up the clutter of apps they’ll never use. Juice up speakers that on traditional tablets fall short for the hard-of-hearing.

Crank up the contrast on colors that bleed into each other for someone with aging eyes.

And for goodness sakes, find an alternative to those teeny-tiny, arthritic-finger-frustrating charging portals.

“A lot of devices are made or designed or programmed in a way that doesn’t take seniors’ needs into account,” said Roger Anderson, director of operational support and innovation at PACE of Southeast Michigan, a program for income-eligible seniors.

“That precision touch on just the right spot with just the right pressure is going to be a problem” for many seniors, he said. “You have to make it work for them.”

And that lesson — forced in the early days of the COVID-19 pandemic in Michigan — may be a crucial tool to help some of the state’s most frail seniors to “age in place” at home.

“When you ask (seniors) where they want to be, few are going to say ‘in a nursing home,’” said Dr. Gwendolyn Graddy, medical director at PACE Southeast Michigan.

PACE, a national program formally known as the Program of All-Inclusive Care for the Elderly, is part health care, part social services, and part day programming. In Southeast Michigan, it serves about 1,200 high-risk seniors who the state has determined are eligible for nursing care. Every weekday, they come to one of five locations through Southeast Michigan.

Some come a few times a month; others come every day, depending on their needs.

On some days, participants might see their doctor, or physical and occupational therapists, or someone to help fit a new hearing aid. On other days, they play cards with friends or celebrate another 100th birthday.

Medicaid and Medicare pay a majority of the costs; most participants qualify for both. 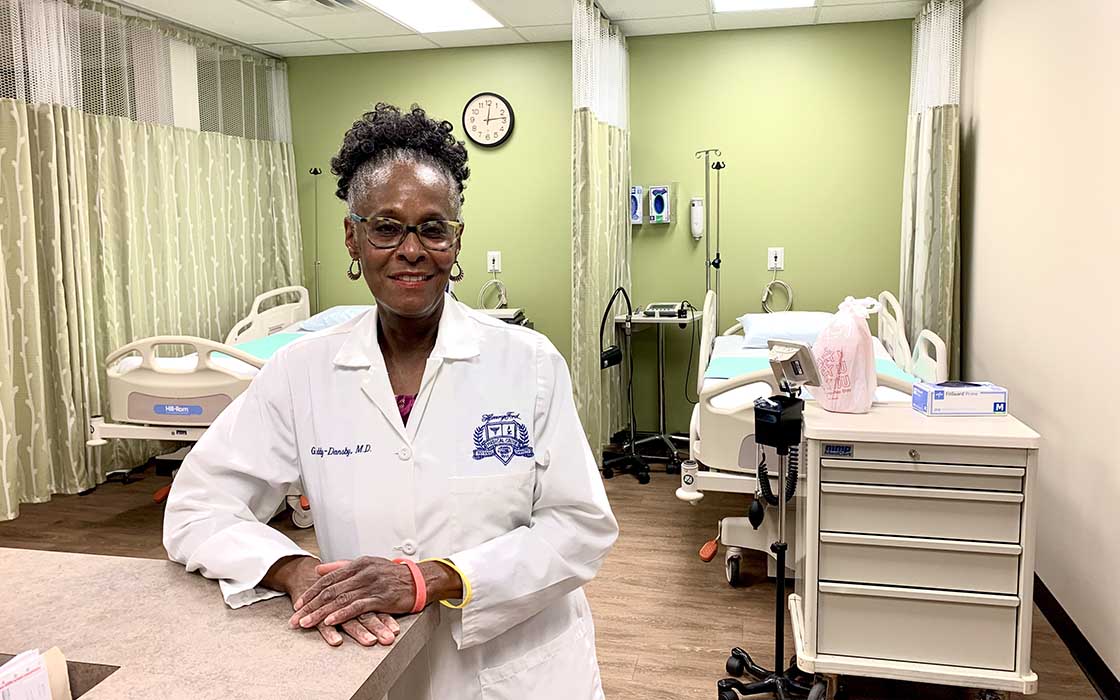 The COVID-19 pandemic drove people inside, and shuttered PACE’s day programming in March, just as it did countless senior centers across the state.

PACE’s medical staff stepped up at-home medical visits, but wanted to supplement that with telehealth. A growing body of research shows that connecting to patients virtually can help reduce hospitalizations and stabilize mental health.

But PACE had tried telehealth before, with disappointing results.

PACE had equipped some seniors with blood pressure cuffs, pulse oxygen monitors, and an invitation to talk with their doctors regularly through a traditional computer tablet. But PACE found that, in addition to a push-back on technology, seniors felt they were giving more (health information) than they were getting (something enjoyable) from the technology, Anderson said.

“They felt it was intrusive and (that) they didn’t gain anything from it. It was all clinical,” Anderson said.

Seniors in the program — who were already deemed so at-risk they could otherwise be in a nursing home — needed more than health care to help them stay in their homes. They needed a friendly face checking in on their day. They needed to maintain social connections forged in pre-pandemic times over card games and breakfast and lunch at PACE.

So the organization turned to Grandpad, a tablet tailored for seniors with large, high-contrast icons, simple instructions and a charging cradle.

For just under $100,000, 122 PACE seniors so far have been trained on grandpads, Anderson said. That includes training for PACE staff and other start-up costs as well.

That’s not cheap, but consider that the money paid out for technology used by more than 100 seniors is roughly about as much as a senior’s one-year stay in a shared room in a Michigan nursing home, according to an October report by the American Council on Aging.

Anderson said the technology’s video capabilities are crucial, allowing PACE social workers, therapists and medical staff to see a participant rather than rely on what they’re being told.

“You can say ‘Yep, I’m fine,’ and ‘I’m not stressed,’” to a doctor, he said.  “But if … you look disheveled, if you’re still in your pajamas at 5 o’clock, maybe those are signs that you’re not really ‘fine.’ Those may be clinical signs of depression.”

The technology also allows staff to ask participants to show them what’s in their refrigerator as a way to make sure meals are delivered on time. They can watch as a senior stands from a chair or navigates a room.

The telehealth and other video capabilities are not meant to replace personal contact, but to supplement it, PACE’s Anderson said.

“If someone looks unsteady, I’ll guarantee you that we’ll have someone out from our team that afternoon with a walker if that’s what it takes to help prevent a fall,” he said.

In addition to a telehealth portal, each tablet was configured for that participant with trivia quizzes, casino games, stories about history or from museums. 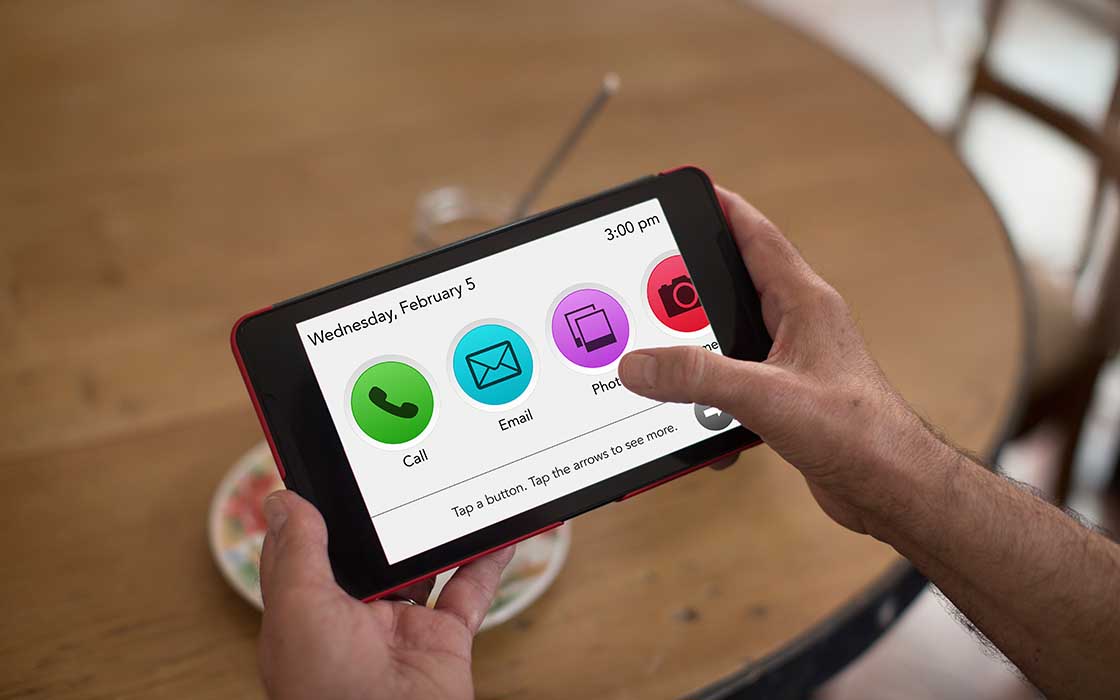 The Grandpad, with large, high-contrast icons, simple instructions and a charging cradle, is tailored for senior users. (Courtesy photo)

A large medical icon directly connects the senior to the health clinic. An icon with a van connects them to transportation. A loved one’s picture opens up a virtual chat with that person who accesses the Grandpad technology from their smartphone.

There are no passwords. No confusing phone trees. No URLs.

And there’s a joke-of-the day.

“They’re so corny, but you have to laugh,” said Clarence Semmes, 70, of Dearborn Heights, who even in isolation this spring was able to “meet” his newborn grandchild in Ohio. “They’re dad jokes.”

Grandpad, in fact, has been handed out to more than 1,000 seniors at six PACE programs across the country, said Jay Hansen, a Grandpad representative working with PACE of SE Michigan.

The average age of the Grandpad user is 83 years old, and that holds roughly true for PACE Grandpad users as well, he said.

Usage among the 122 PACE seniors varies, but about one in five of the participants tap on their tablet at least once a day. All told, the PACE participants average 2,456 clicks weekly, according to Anderson.

One small study, published in 2019 in a journal of The Gerontological Society of America, concluded that the Grandpad technology “can easily be implemented in health care settings.” Among the 21 patients aged 60 to 94, more than four in five reported the Grandpad was easy to use and helped them connect to their providers.

At PACE, Anderson said he plans to compare hospitalizations and emergency room visits among Grandpad users compared to non users once the pandemic threat has passed.

Joyce Hearn, 69, is a fan, even though she gave up on her desktop computer long ago. 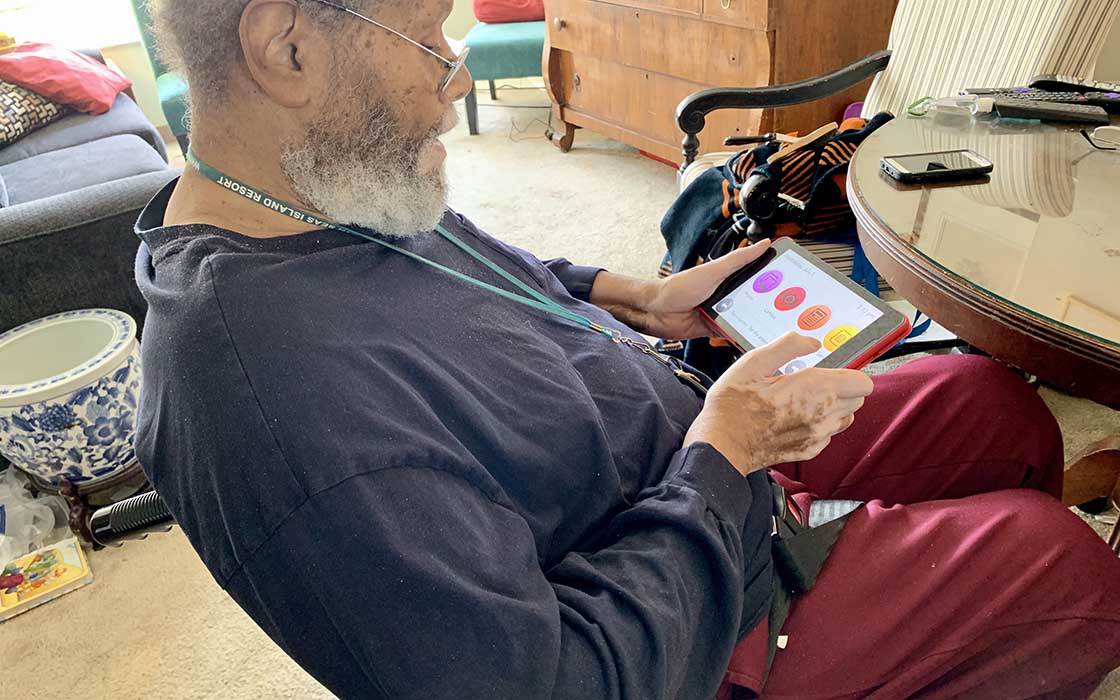 From miles away, Clarence Semmes, 70, of Dearborn Heights, watches his grandchildren grow as he uses technology tailored for seniors. (Courtesy photo)

In those isolating winter months at her Detroit home, Hearn’s Grandpad linked her to health providers at PACE while it also offered trivia games with PACE friends, crosswords, and beautiful scenes from faraway places — like Madagascar with its bright green lizards, outer space with sunlight sending beautiful colors onto meteors and other places “I would never ever see,” she said.

“I almost got depressed for a while, but it helped me out because you can’t believe how many things I can do with it,” she said. “You’d be really surprised.”