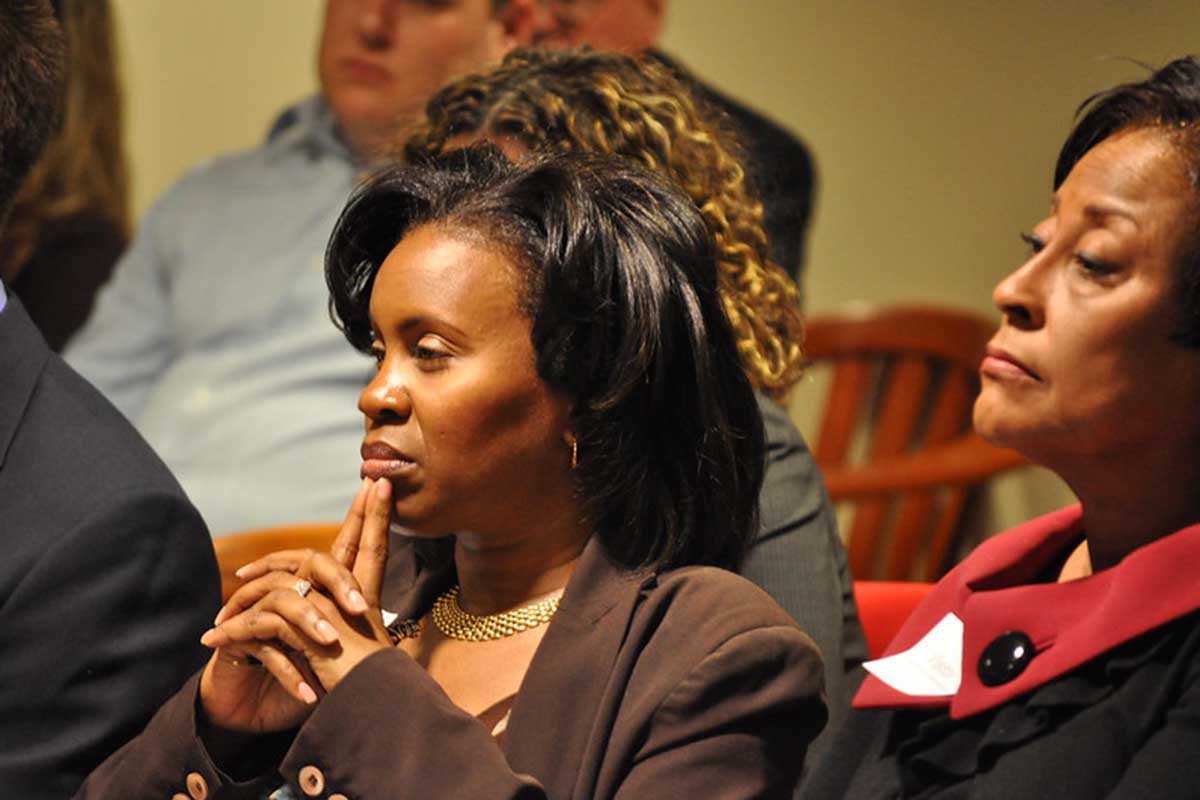 This post has been updated to reflect the city clerk’s role in an investigation into possible missing absentee ballots.

With less than a week before the Nov. 3 election, Detroit voters have much to consider, including the rising number of coronavirus cases and deaths and the ongoing legal battle over whether or not residents carrying legal firearms at the polls is a form of voter intimidation.

The 2020 election is already completely different from years past.

Because of the pandemic, fewer people are expected to vote in-person on Election Day. Most have opted to vote absentee and the Detroit City Clerk’s office has overhauled its process to accommodate the shift.

More than 173,000 Detroiters requested absentee ballots and over 123,783 were returned as of Oct. 28. And 255,000 residents are expected to vote by Election Day, according to Tracy Wimmer, spokesperson for Secretary of State Jocelyn Benson.

Yet, for the last few years, a smooth election has eluded the majority Black city.

Complaints about Detroit’s elections and disenfranchisement claims have continued for at least 20 years. Detroiters were frustrated in 2016 when Trump won the election by 10,704 votes. Voters contest that the election was plagued by missing poll books, power outages and widespread voting machine errors that made ballots ineligible for recount.

During the August primary, the pandemic forced last-minute polling location changes that created widespread confusion and displaced 40,000 voters. There were also inconsistencies in counting and recording tens of thousands of absentee ballots.

In September, a small group of protesters gathered outside of Detroit City Clerk Janice Winfrey’s home to publicly criticize her performance as clerk. In a video from the protest, Winfrey can be seen approaching the group with a water hose and moving a water sprinkler close to where the protesters are gathered. Aside from the protests, several Detroiters have taken to social media to complain about Winfrey.

Jack Barthwell, 29, says Winfrey seems to be doing worse at her job of running elections each time.

“Now with all eyes on Michigan and Detroit, I have no confidence in her ability to handle all of the factors that are going to shape this count,” Barthwell said. 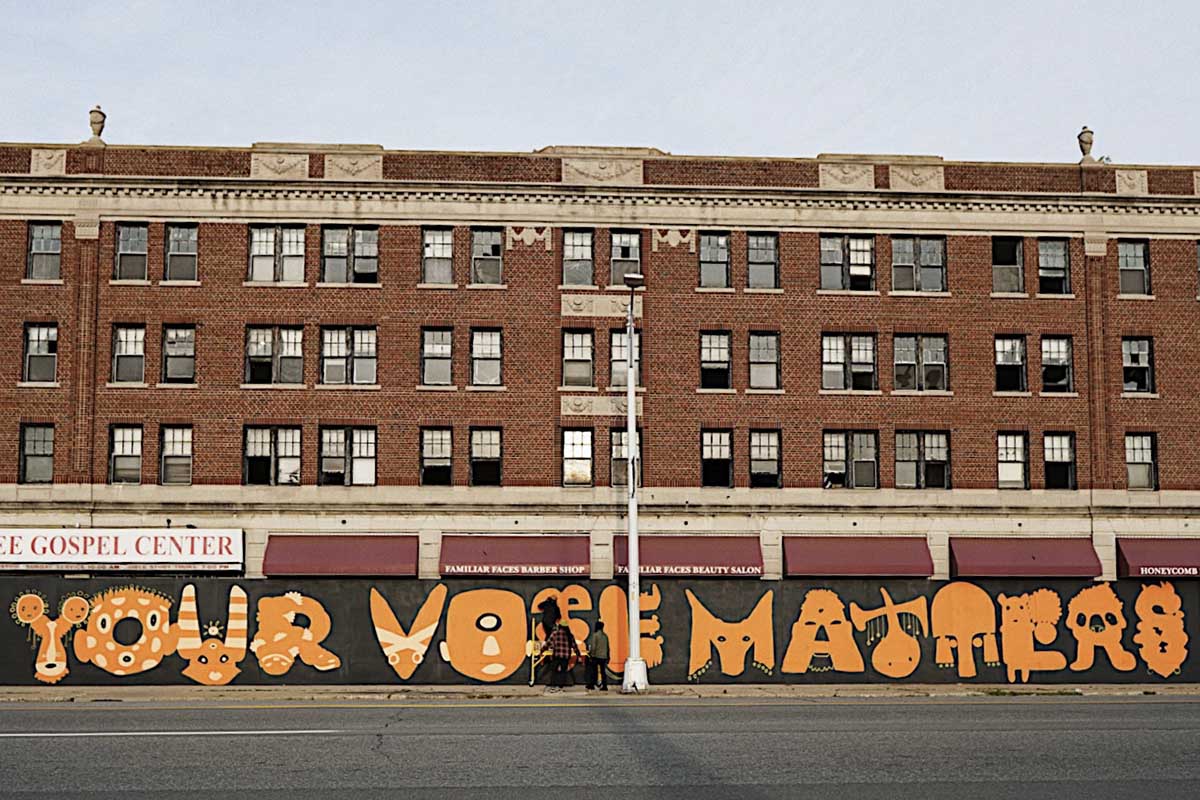 Local organizations have joined the Secretary of State and clerk’s office to get out the vote during the pandemic. (Mural by Tony Whlgn and courtesy photo by Bre’AnnWhite)

Just this week, Winfrey and Detroit postal officials recently launched an investigation into absentee ballots that may have gone missing in the mail. It’s unclear how many may be missing, officials said. Barthwell believes Winfrey’s election blunders are a bad sign of things to come.

“It would be different if this was just a blip on the radar.  Unfortunately, this is par for the course,” he said.

Winfrey says a lot of the criticism that falls on her office for these blunders is unwarranted. Some say the Detroit Department of Elections is not immune to the challenges faced by the city, including decades of disinvestment and navigating the hurdles posed by being in one of the nation’s poorest major cities.

Managing elections in Detroit is a complex process that takes months of preparation. The clerk says her office coordinates with “almost every part of the community” it serves, from police who drop off poll books on Election Day, to schools, churches and jails where inmates waiting for arraignment get ballots. The office also coordinates with DTE in the event of a brownout or loss of power.

These various elements make the process vulnerable to human error.

“What people don’t understand about elections is that it’s very hands-on. It’s very human. And humans make mistakes … And there are a lot of moving parts,” Winfrey said.

Detroit also has the highest number of registered voters in the state and 503 voting precincts.

The herculean effort of managing Detroit elections inspired the partnership between the city clerk and Secretary of State Jocelyn Benson, who oversees elections for all of Michigan and is now helping the city in November.

Wayne County Clerk Cathy Garrett is also a partner in Detroit elections. She ensures municipalities have IT support and printed ballots. The county provides the city with an adequate number of voting machines.

Winfrey credits Benson for her help in this election. 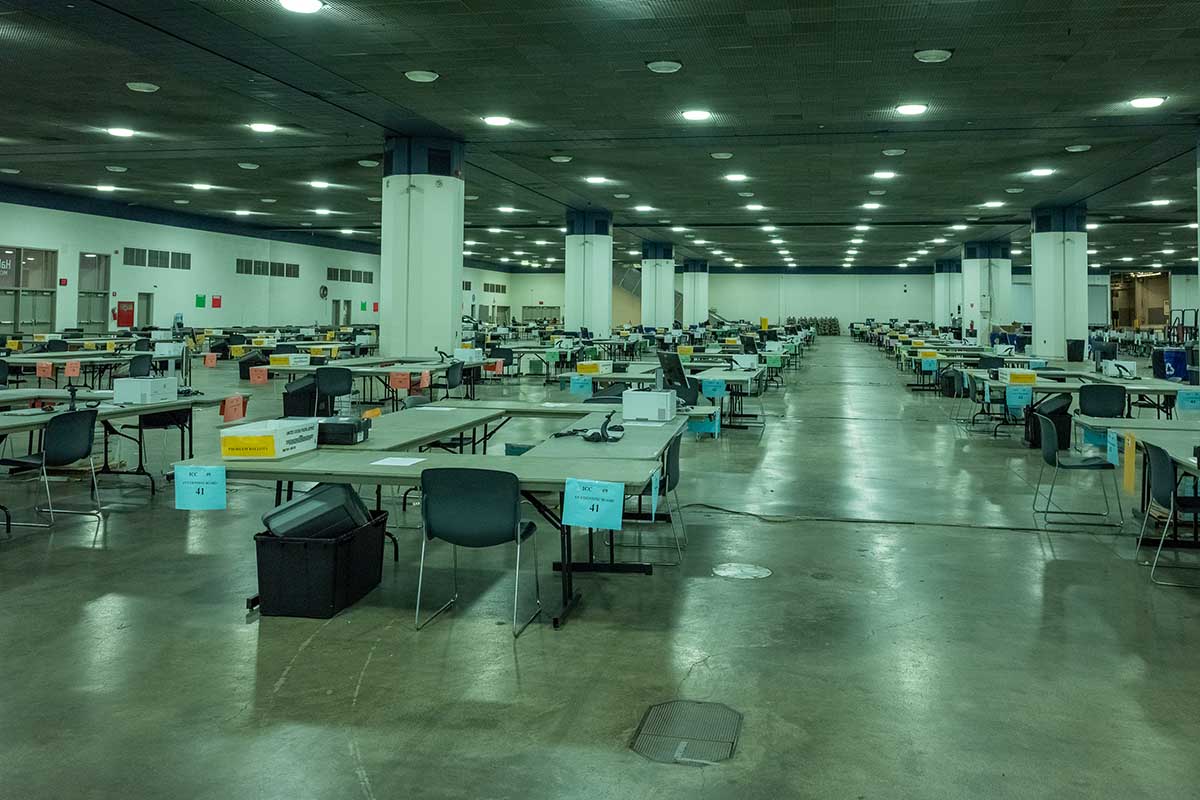 Fewer Detroiters will be at the polls on Nov. 3. Most have opted to cast an absentee ballot that will be processed downtown Detroit at the TCF Center. (BridgeDetroit photo by Ralph Jones)

Winfrey says she’s worked with Benson since she was elected in 2018. But that doesn’t mean Detroit has always had the best relationship with the state. Detroit needed funding for new voting machines during the presidential election in 2016, and the state said no.

“In 2016, when we begged for machines, our machines were 10 years old, and we knew they were going to be problematic,” she said. “A 10-year-old voting device is like a 10-year-old car driving to Mississippi from Michigan. So not very reliable oftentimes, right?”

That year 60 percent of the city’s precincts were ineligible for a recount.

Sharon Dolente, Michigan voting rights strategist with the ACLU of Michigan, says if the state of Michigan fully implements Proposal 3 from 2018, elections would run more smoothly. The proposal, which was passed by Michigan voters, sought to create same-day voter registration, to make it easier for people to vote.

Aghogho Edevbie, the Michigan director of All Voting is Local, agrees that the passing of Proposal 3 has made a huge difference in how Detroit elections function. Edevbie credits the proposal with making it easier for Michiganders to vote absentee.

“Four years ago, only 26 percent of Michigan voters voted by absentee ballot,”  said Edevbie. “We are going to more than double that I would guess. At this point in time, and dealing with the surge in absentee ballots, and making sure they’re counted.”

Edevbie points to this higher number of absentee ballots as one of the big challenges to this current election, along with the precautions being taken due to the ongoing coronavirus pandemic.

“There are a lot more pieces involved in the puzzle than there were before and we also have to be aware of the complications that COVID raised with the system, and still having ample in person voting options for voters,” he said. “But the biggest piece of it, undoubtedly, is the increase in absentee voting.”

Winfrey says the ability to recount ballots that may have been incorrectly labeled or counted would benefit Detroit.

“For example, if a poll worker is given a seal certificate with the number 1234 …  But that poll worker takes that seal after working 20 hours and writes 1243 and then seals with 1243 instead of 1234. That canister is deemed unrecountable because of clerical error, or because of a poll worker mistake,” she said.

Winfrey argues that in other states, they can still recount that canister. She believes the ability to recount ballots is the only way to show real integrity in the process.

But for Winfrey, the clerk’s office had help this year. An infusion of cash, about $7 million from the Center for Tech and Civic Life went far to ease Detroit elections. The City Clerk’s budget for this fiscal year is $2.5 million; the Department of Elections’ is $10.5 million not including the grant.

The city typically trains between 8,000 and 10,000 poll workers, but Winfrey says the pandemic also made it easier to recruit reliable workers.

“The only silver lining of the pandemic is that we have more people who are able to work with us on Election Day. People who ordinarily work real jobs, are able to follow the written instruction, as well as oral instruction, who are leaders and professionals in and of themselves. And so they’re able to bring some of those skills to us and help us get through this process,” she said.

The clerk’s office has recruited about 10,000 poll workers for this election cycle so far, according to Winfrey.  She bolstered her team of election workers with Black fraternities and sororities.

“Senator [Kamala] Harris said early on that, you know, ‘I need the Divine Nine, I need you all to step up and help your clerk’ and they have,” Winfrey said who contacted local chapters.

Winfrey says the state and city’s decision to install additional drop boxes for mail-in ballots will reduce the long lines typically seen in other cities on Election Day. She also believes the state’s willingness to allow poll workers to work shorter shifts will help the elections department process hundreds of thousands of ballots. Winfrey petitioned the state for this change. In previous elections, Detroit’s poll workers could work 20 to 24 hours a day.

Despite a history of election woes, Winfrey is optimistic about next week’s presidential election but cautions Detroiters.

“We need to be smart. We need to relax. And we need to trust the process. You know, in the city of Detroit, we don’t get a whole lot of credit for doing anything right. And that’s by design. But one thing we do know is that we can vote easily.”