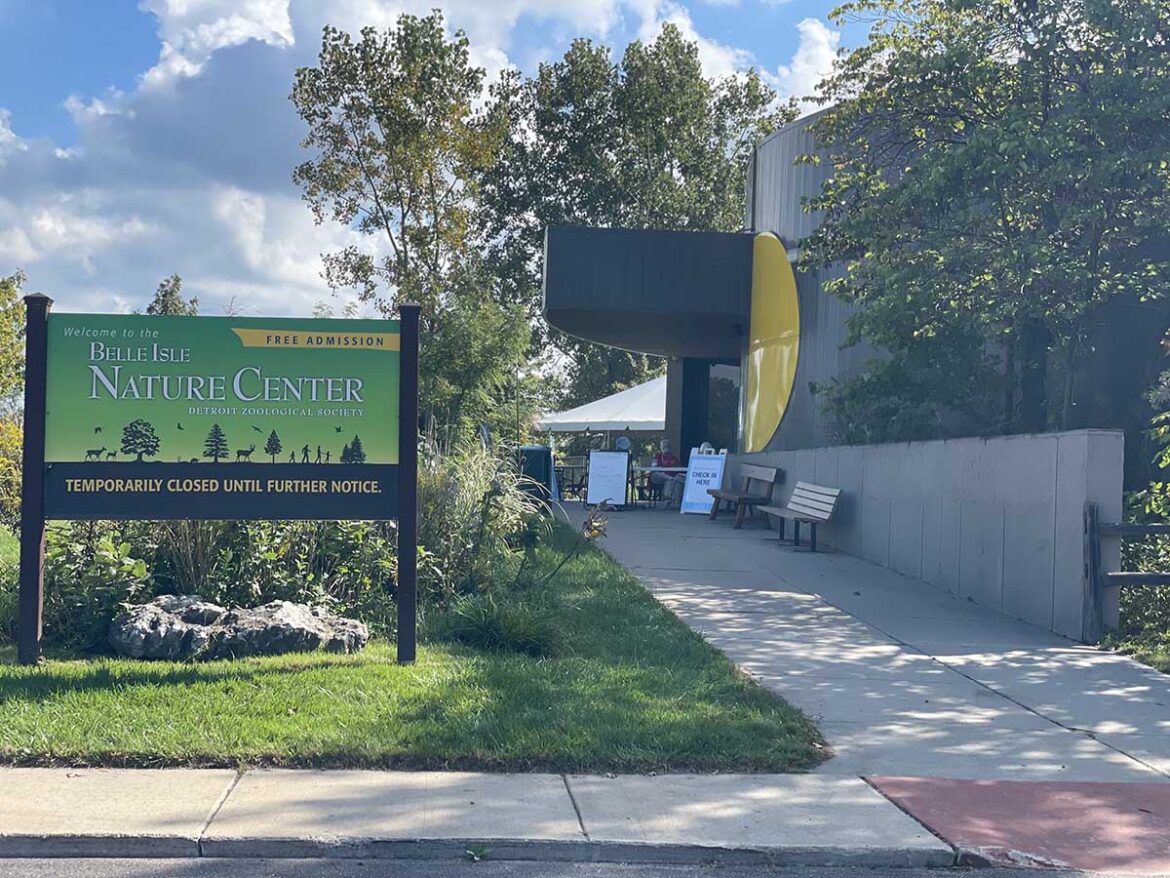 The Belle Isle Nature Center is currently closed for renovations and is expected to reopen in spring of 2022 (Photo by Olivia Lewis, BridgeDetroit).

The Belle Isle Nature Center is getting a facelift.

During a Belle Isle Park Advisory Committee meeting last month, park leaders shared plans for a $2 million renovation to the interior of the building. The Nature Center provides educational, environmental and nature experiences for Michiganders, and access to those programs and experiences are particularly important to Detroiters.

The City maintains ownership of the park but in 2013, then-emergency manager Kevyn Orr entered into a lease agreement that made the island a state park and put its operations under the control of the Michigan Department of Natural Resources.

The Detroit Zoological Society operates the Nature Center. The interior of the building is currently closed for renovations with outdoor programming available on Fridays and Saturdays. When the Nature Center reopens, visitors may see upgrades to existing exhibits, an increase in interactive areas, and the addition of frog and salamander habitats. The work is expected to be completed in April 2022.

“They are still in the planning stages, but the goal is to further our ability to provide unique educational, environmental and natural experiences that help connect people with wildlife and urban nature,” Spence told BridgeDetroit in an email.

Park staff say they’re well aware of the need to include Detroiters in the decision-making process while maintaining space and opportunity for residents to participate in the park. They say they’ve built partnerships with the Detroit Public Schools Community District, and neighboring districts in Wayne County, to provide learning experiences for students.

“Our code of honor calls for us to be culturally relevant to the community, and we take that responsibility seriously,” said Michelle Hodges, president and CEO of the Belle Isle Conservancy.

The Conservancy fund-raises for park improvements and operates the Belle Isle Aquarium. Hodges is the chairwoman of the Belle Isle Park Advisory Committee (BIPAC), which advises the state on park activities, public safety and improvements, among other things.

Representatives of BIPAC are appointed by the governor, City Council and mayor. One BIPAC member is appointed by both the governor and mayor, and at least three members must be Detroit residents. Their public meetings have included discussions about who accesses the public park and who feels welcome on the island.

Some Detroiters have criticized the entities operating Belle Isle for a lack of communication about available programs to Detroiters and the visibility of Black participants in its digital outreach, particularly regarding fund-raising events. However, The Conservancy has multiple photos of Black people on its website and in its newsletter. The Conservancy also has an online park user feedback form that it uses to align its work with community values.

BridgeDetroit asked for the results of the feedback survey, but Conservancy staff said they were still collecting data.

“Our energy is directed toward a very positive and welcoming spirit,” Hodges said. “If anything is the contrary of that we certainly want to address that.”

The next BIPAC meeting will be held on October 21.